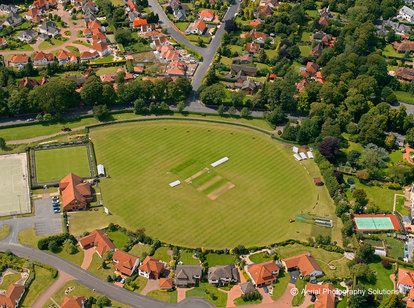 Cambusdoon New Ground is located in Alloway on the former Robertson's Field and has played host to a number of Scotland Cricket Internationals, as well as being the home of Ayr Cricket Club, founded in 1859, since 1997, when they moved across the road from the original Cambusdoon ground. Ayr Cricket Club had moved from the Dam Park to the original Cambusdoon ground in 1935, and was their home for 60 years until sold for housing in 1995. The original cricket ground, which hosted two first-class matches (Scotland v Ireland in 1958 and 1974), was developed on the grounds of the former Cambusdoon Estate, once owned by 19th Century Iron and Coal magnate, James Baird. Baird's original Cambusdoon House, now a ruin, was converted to a boys' preparatory school in the late 1920s, and the rest of the estate surrounding the cricket ground was developed for housing in the late 1930s. The former England cricket captain Mike Denness grew up in one of these houses, on Shanter Way, which adjoined the cricket ground.

The Cambusdoon ground, has a purpose-built floodlit astroturf pitch, was originally used by Ayr Hockey Club, who have now moved to pastures new and now home to the recently formed Cambusdoon Football Club and is used for 5-a-side and 11-a-side football. There is also a bowling green, with the Cricket Club, Football Club and Bowling Club under the umbrella Cambusdoon Sports Club title.