With no league or cup competitions currently allowed due to the current lockdown restrictions and following the First Ministers announcement recently it seems unlikely any interclub matches will take place this season, play though has eventually been allowed in the form of intra club matches. This being the case the club has organized the Howard Jefferson Trophy with two squads of players the Alloway Aces and the Cambusdoon Crusaders made up of a mix of senior and juniors players, and to be played for over four T20 matches on Thursday evenings and four 40 over matches on Saturdays. 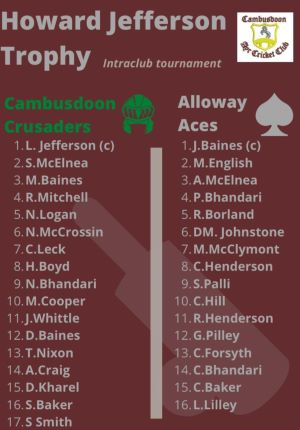 The squads for the upcoming Howard Jefferson Trophy
13 August 2020

The Aces took a 4-3 lead in a high scoring game at a sun kissed Cambusdoon. Batting first they posted an impressive 197-1 with the main contributions coming form Michael English (112) and Matt Davidson (51), but it could all have been different if the Crusaders had taken their catches, with three catches being spilled in the first over,  English twice and Davidson once and both taking advantage of their good fortune by putting on a century stand before Davidson had to retire to head to Millbrae for Rugby training with the Ayshire Bulls and English going on to complete an excellent century.

The Crusaders reply got off to a steady start but lost Doc Logan early which brought Scott McElnea to the crease and he promptly increased the tempo of the innings hitting 45 off only 15 balls before being caught on the extra cover boundary by brother Andi off the bowling of English. Lloyd Jefferson(62no) and Matt Baines (44ret) kept the impetus going, but not quite enough to snatch victory as they finished on 182-2

The Crusaders drew level in the series with victory by 19 runs today. The Crusaders batted first on a damp and slow wicket and lost a couple of early wickets before a fifty partnership between Lloyd Jefferson (33) and Ross Mitchell (55no) steadied the ship. When Jefferson departed Niall McCrossin (30) joined Mitchell and produced another fifty partnership until McCrossin was trapped in front by Chris Hill. There was then  flurry of quick wickets as the innings ended on 173-7.

The Aces reply got off to a terrible start losing the inform Michael English and Matt Davidson with only 6 on the board. Andi McElnea (32) led a brief fightback until he has caught on the long on boundary by brother Scott off the bowling of Callum Leck. With Pushkar Bhandari (45) and Josh Porter (29no) at the crease after the fall of a couple of quick wickets, what seemed an impossible victory became a glimmer of hope as they upped the run rate with some hard hitting, but when Bhandari fell to an outstanding catch by Lloyd Jefferson at extra cover their hopes of victory disappeared. Callum Leck was pick of the bowlers finishing with 2-7 from his six overs.

Another Victory for Aces

The Aces continued on their winning ways with a thumping 9 wicket victory. Some good tight bowling restricted the Crusaders, who had a number a number of batsmen making a start, but none kicking on to make a big score, to 98-8 from their 20 overs. Matt Davidson was pick of the bowlers taking 3-14.

The Aces reply got off to a flying start with Matt Davidson (29) and Andi McElnea (44no) in fine form. When Davidson departed, bowled by David Baines, Michael English(21no) joined McElnea to finish off the job as they reached their target with 7 overs to spare
Scorecard
23 July 2020

​The Crusaders came out on top in the first T20 match thanks in the main to an excellent partnership between Neil ‘Doc’ Logan (66) and Scott McElnea (55) as they scored 165-4 in their allocation. Matt Davidson was pick of the bowlers finishing with 2-23. The Aces reply got off to a great start with Michael English (58) and Matt Davidson (31) in fine form, but once they departed it was only Andi McElnea (35) who was able to make any impact on the bowling and wickets fell at regular intervals as they were bowled out for 155. Nari Bhandari 3-23 and Scott McElnea 2-19 pick of the bowlers.